then we learnt about refraction. refraction is when light bends when it hits water. or when it bends at all.

One foggy day in April,  I left school early at 1:12 pm on a Thursday.  It was pretty foggy so I was excited to leave for Vancouver.  Me and my mom were waiting at the  main doors of OJCS waiting for my sister to come. She finally came, then we left to go home to bring  my dad with us.

We met up with my dad and the next thing I knew I was in the taxi.  We put all our suitcases in the trunk then we were ready to go to the airport.

We were on the plane on the way to vancouver!

The first day in Vancouver was foggy like Ottawa but it was a bit warmer so I was pretty happy.  The thing I was the most happy about was seeing my grandparents for two weeks.  My grandparents are REALLY nice to me so I was SUPER excited to go see them. I call my grandparents savta and grandpa mike their names are Sharon and Michael. They live in Kerrisdale (it’s their neighborhood)  their house is quite big but I share a room with my sister, Sarah or Sammie, and my parents sleep in the basement.  On that day we didn’t really do much.  So I’ll skip to the next day. I woke up in The morning at 4:00 AM because of the time difference so I watched youtube and played games on my nintendo switch until 9:00 AM. My grandparents were downstairs by then so I decided to get up for the day.   It was a normal day. We ( we, as me and my sister) went downstairs and had breakfast. It was just a normal day of normal stuff. (plus it was kinda boring to write about, plus i kinda forgot so I’m gonna skip to when my grandparents brought me and my sister to their house in gibsons!)

A few days before we went to Gibsons my parents told us we were going, Then I was in the car going to Gibsons or let me rephrase that, the ferry to gibsons. We brought our car there so me, my sister, and my grandma were going to explore the ferry while my grandpa stayed in the car. We got pretty tired of exploring so we went back in the car. Me and my sister played games on our phones for like 15 minutes and by the time we were done we were there at Gibsons!

(Gibsons is some sort of village near vancouver)

When arrived at Gibsons we were SO excited to get to their other house. After driving for 5 five minutes we were there. Their house was big and their garage was separated from their house. My sister said it should be some kind of studio. When we went inside it was quite huge. It was quite high above ground so their living room was a bit lower than their dining room. And they had a SUNROOM where we played a game called Charen.. I played against my grandpa. He won the game, then he played a game with my sister. Their backyard was bigger than my HOUSE!!!! (at the time.) I was amazed they had a whole GARDEN inside and when you went to the complete back you could see some kind of BEACH.then me and my sister played tag in their backyard.  Then my grandma and my sister went shopping but I stayed back and played video games.when they came back from the store my sister bought me some cool crystal and some pencil crayons and a sketch pad. I played a bit more video games then I had to go back to their house in vancouver. I used the pencil crayons and the sketch pads to draw my minecraft avatar. I felt very car sick because of the drawing I was making. (I didn’t know that at the time so I kept drawing) by the time I was done we were home. So goodbye I’m gonna end my recount here. 🙂

I like drawing, for example, I made a lot of little creatures and I cut them out and bring them home and I use them as toys. hopefully I can find out how to put a picture of my cutouts on Google docs on I pad. Here they are.

I like drawing because I am very good at it. Look! 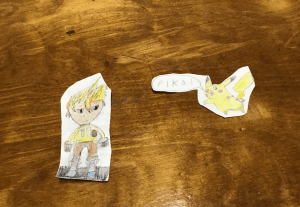 I also like Pokémon as you can see most of my cut outs are Pokémon, while some I made up. But I also like dragons 🐉 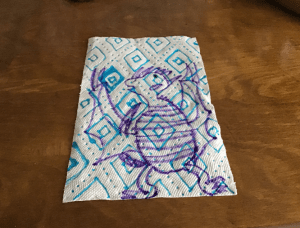 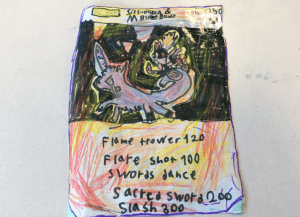 It’s the same card just the 2nd one is just the back of the card, 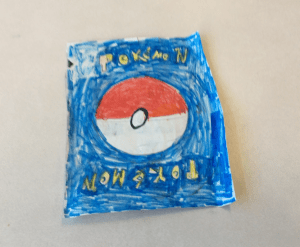 I also have a whole art binder! (there is also most of my good art and drawings in my binder) yesterday I showed my whole class all of my art binder! My art inspired my teacher so she included art in the math that we did after I showed the class my art binder. I also love making beasts. I love drawing because it keeps me busy when I’m bored. 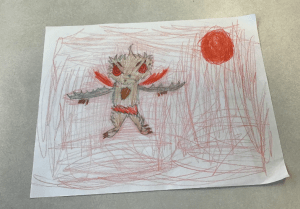 And when I’m done and I like them I keep them and look at them and I’m like oh those are good.

I started drawing when I was about 3 years old.

Welcome to your brand new blog at Edublogs!

To get started, simply visit your blog’s dashboard, edit or delete this post and check out all the other options available to you.

We can walk you through step-by-step in our guide to getting started with your blog.